In 2015, the significance of the social dimension of sustainability rose higher on Suominen’s agenda as a result of the chosen strategic emphasis and, thanks to the materiality analysis conducted, the increased understanding of which themes of social responsibility are essential to us.

“Suominen aims at being open and transparent. We want to discuss about topics that are important to us, but even more, we want to take concrete measures,” says Hannu Sivula, Senior Vice President, Human Resources.

One of the three key initiatives Suominen launched to implement its sustainability strategy and enhance social responsibility last year was Non-Discrimination and Equal Opportunities Program. It included several projects, including the Blind Hiring Pilot (read more about it here) and an internal study on pay equity between men and women.

According to the study, women's salaries at Suominen are a bit higher than those of men on average.

The study involved all Suominen’s salaried employees globally, i.e. 277 people in total. Employees with hourly wages were excluded from the study because of the comparability issues between employees. This is what we found out. 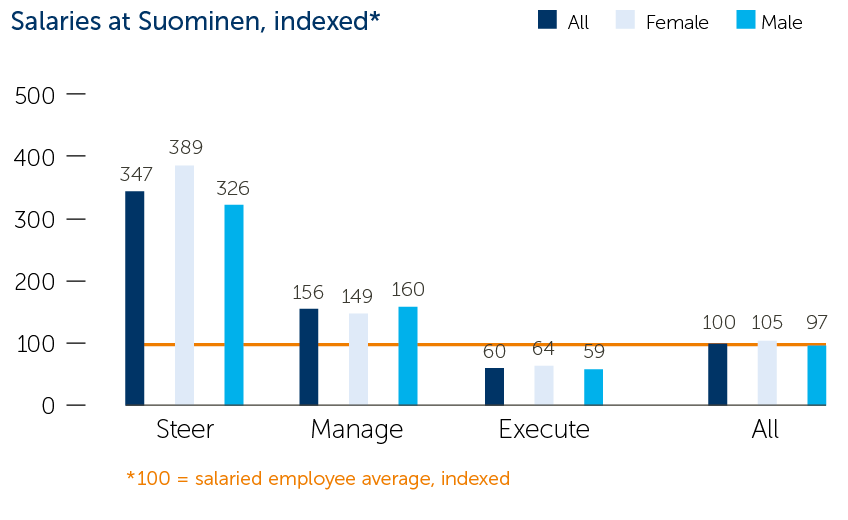 We gained valuable information on the current situation through the study and, much to our delight, we discovered that the overall situation is fairly good. According to the study, women's salaries at Suominen are a bit higher than those of men on average.

“At Suominen, we don’t have different euros for men and women.”

We found out that the gender pay gap varied somewhat from country to country due to structural reasons. For example, at certain plants women and men are not equally represented in all functions and on all organizational levels, which makes valid comparison difficult. Our conclusion was that the root cause of gender pay gaps at Suominen is structural imbalance, rather than men and women being paid unequally for the same work.

“Gender is not a factor in compensation, for it’s based on position evaluation and personal contribution. At Suominen, we don’t have different euros for men and women,” states Hannu Sivula.

Suominen is committed to the “equal pay for equal contribution” principle and we will monitor the gender pay gaps and we will take corrective measures whenever necessary.