Setbacks in Latin American economies have hindered the growth of local nonwovens market, but the future looks promising. However, in many people’s minds Latin America is a declining and unstable market. The truth is that aggregate gross domestic product growth in Latin America has been greater (at 3.7%) than that of the USA and the European Union (under 2%) for the past 10 years.

Latin America also has a population of more than 600 million. If it were a country, it would be the third most populous in the whole world, right after China and India. That is to say, it would be a mistake to overlook Latin American wipes market, especially now that it is the fastest-growing nonwovens market in the world.

“Latin America is truly an interesting consumer market. The share of urban population is well above the world average, at 80%, creating good premises for convenience driven growth,” Ernesto Levy, Senior Vice President of Convenience business area at Suominen, says. “For sake of comparison, China’s share is at 56% and India at 33%. Remarkable is also that Latin American population life expectancy has increased by about one year every five years in 2000’s, shaping the market structure similarly as in the western economies.”

The demand for nonwovens is still emerging in Latin America, and baby wipes currently represent more than 90% of the wipes market. In terms of market development, that puts Latin America where North America and Europe were some 20 years ago, when baby care was the dominant application for wipes. Today, the situation in North America and Europe is more balanced and baby wipes are a clear minority compared to combined market share of all other wiping applications.

The development in Latin America is following the path of North America and Europe. It is like a natural law that the rise in the standard of living will also increase the demand for different kinds of wipes and also for hygiene products: When gross domestic product (GDP) increases to only USD 1,000 per capita, people start using disposable sanitary napkins. When the GDP rises to roughly USD 7,000 per capita, demand extends to baby wipes and at USD 14,000 to household wipes.

Of the biggest Latin American countries, Mexico, for example, is already way past ‘the baby wipes point’ and closing in on the use of household wipes and the same goes for Brazil. Colombia, for its part, is on the verge of taking baby wipes into use in the large scale.

It goes without saying that as the Latin American wipes market develops, other wiping applications are gaining market share and, in the course of time, new kinds of wipes, such as flushable wipes, will appear. 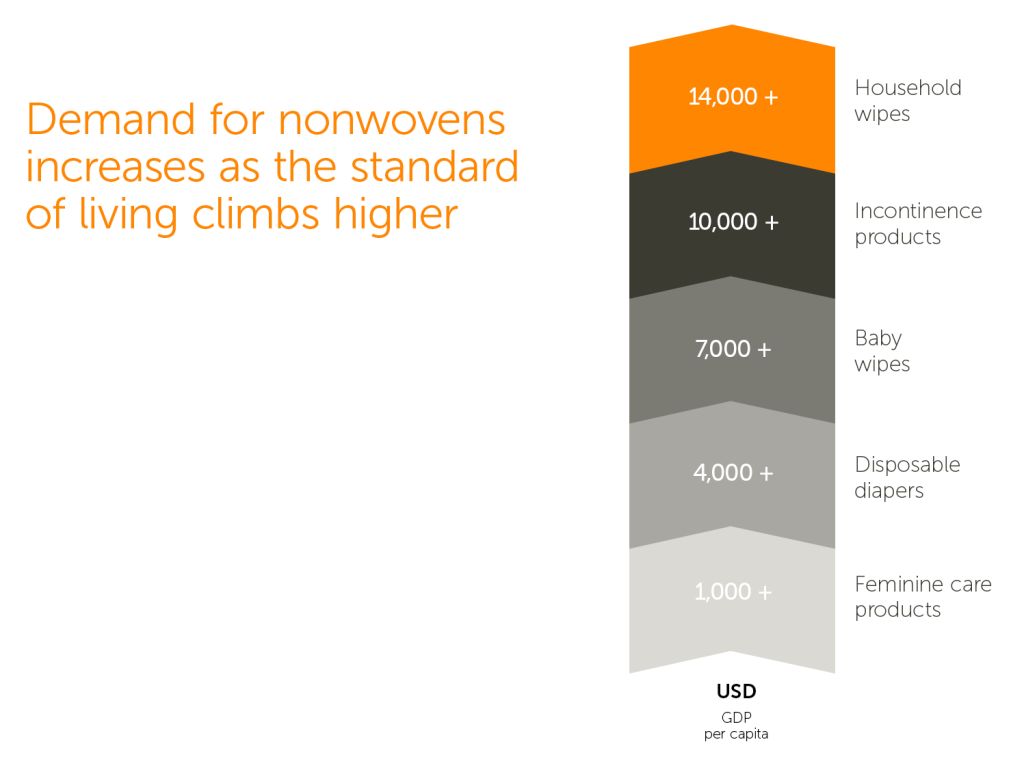 As the global market leader in nonwovens for wipes, Suominen has been present in the Latin American market for years. We have had our own production plant in Paulínia, Brazil, since 2014, which gives Suominen a local foothold that is vital for business growth in the region.

Increasing the share of nonwovens with higher added value is the most important thing in Suominen’s strategy, which means that, on a global scale, Suominen creates nonwovens for wipes that stand out from bulk products that baby wipes often are. Latin American consumers, even those who typically use low-cost baby wipes, value high-end product features when those serve their own or their babies’ needs, e.g., by offering incomparable cleaning results or exceptional softness. The demand for this kind of features will increase as the wipes market grows and matures.

“We know that Latin America is not Europe or North America and the needs of Latin American consumers are not the same as elsewhere. When it comes to nonwovens, we have to offer wipes materials that are tailored for local needs meeting the consumer expectations in wipes from dispensing to functionality,” Ernesto Levy says.

Ernesto Levy, Senior Vice President of Convenience business area at Suominen, will speak in OUTLOOK Plus Latin America conference. His presentation “The Future of Wipes in Latin America – Myths and Realities about the Fastest Growing Wipes Market in the World” is scheduled at 5 pm on Wednesday 8 March 2017.